Duties of Women With 145 Quotes 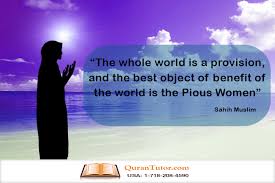 Duties of Women With 145 Quotes

The Purpose of Marriage


Marriage is a natural necessity for every human being. It bears many good outcomes of which the most important ones are:
(1) The formation of a family through which one can find security and peace of mind. A person who is not married resembles a bird without a nest. Marriage serves as a shelter for anyone who feels lost in the wilderness of life; one can find a partner in life who would share one's joy and sorrow.
(2) The natural sexual desire is both strong and significant. Everyone should have a partner for satisfying their sexual needs in a secure and serene environment. Everyone should enjoy sexual satisfaction in a correct and proper manner. Those who abstain from marriage often suffer from both physical and psychological disorders. Such disorders and certain social problems are a direct consequence of the abstinence of youth from marriage.
(3) Reproduction: Through marriage the procreation of mankind is continued. Children are the result of marriage and are important factors in stabilizing the family foundations as well as a source of real joy to their parents.
A great deal of emphasis has been given in the Holy Qur'an and the Traditions to both marriage and having children. The Almighty Allah states in the Holy Qur'an:

You can have healthy children by observing these codes of hygiene and cleanliness.