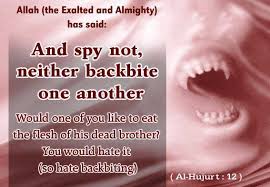 The person who does not defend his brother when people are backbiting about him, gets the punishment of backbiting

“To the person who defends his brother -where he can- in an environment where people are backbiting about his brother, Allah defends him in this world and the hereafter. If he does not defend his brother, Allah gives him a punishment as if he backbites himself, in this world and the hereafter.”(Asbahani)
“Whoever prevents people from backbiting about somebody, Allah closes a thousand doors of evil (shar) about him/her. But if he/she does not prevent them he is also considered to be backbiting.” (40 Hadiths Collection)

Narrated by Hadrat Aisha:
“Rasulullah’s (pbuh) wife Safiyyah’s camel got sick. His other wife Zainab had many camels. Rasulullah (pbuh) asked Zainab to give Safiyyah a camel. Zainab said:
“Am I to give my camel to that Jew?” Rasulullah (pbuh) was furious because of these words, so during the months of Dhu'l-Hijja, Muharram and a part of Safar he did not visit Zainab.” (Abu Davud)
“Nobody tell me anything about my friends (Ashab) that will bother me. Because I want to face you and in the Akhirah(hereafter) face Allah with no bad feelings about anyone." (Tirmidhi)
Someone came to our Prophet (pbuh) and wanted to say some things about Hadrat Khalid. Rasulullah turns him back without letting him say a word.

A man came to Omar Bin Abdulaziz and said:
“So and so person said these things about you.”
Omar said:
“If you wish we can investigate this. If you are lying “O you who believe! If a liar, sinful person brings you an information, first investigate it(’s authenticity) thoroughly, lest you unwittingly annoy a folk and then become persons remorseful for what you have done.”(Al-Hujraat, 6) you will be considered according to this verse.
But, if you are not lying “oath mongers, abased (with no valuable insight, constant fault-finder (sneering behind people’s backs), regular chasers of slander-retailing, persistent hinderers of good, transgressors, utmost sinners, bullies; after (all) this, (even) stigmatized by illegitimacy” (Al-Qalam, 10-13) you will be considered according to this verse. Either way, you are responsible. If you wish we can choose the third option: to forgive you and leave it at that.”
The man said:
“I apologize. I will not attempt this again.” (Kutub-i Sitta)

A person who is in an environment where people are backbiting

A person who is in a situation where there are people backbiting he should warn the backbiter in a proper way and try to close the subject. If they keep backbiting despite his warning, he should leave the environment.

A person who hears of his own gossip

One day they told Hasan Basri:
“So and so person backbited about you.” Upon hearing about this Hasan Basri sends the backbiter a plate of fresh dates with this message attached:
“I heard that you gifted me your good deeds, I wish I could return the favour but I cannot. Please forgive me!”