Home LIFESTYLE OTHER How To Handle Our Weakness

How To Handle Our Weakness 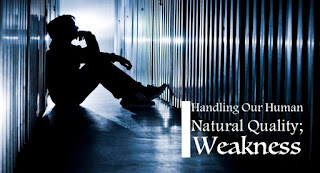 How To Handle Our Weakness

Alhamdulillah… Infinite praise and thanks are due to the Almighty Allah, who created man and decreed that he lives all his life on earth with weakness. Complete blessings and salutations go to the best of teachers, Sayyidinā Muhammad, his household, his companions, and all those who follow his guided path till the end of time.

One of the essential qualities of man is the quality of weakness. I call it quality because it is natural and beyond human control. “And man has been created weak” (Qur’an, 4:28). As much as we are created with weakness, we are also made to know about our weaknesses and what they are. An indication, that this terminal weakness comes with many strengths. The more one realizes his human weakness, the more he can get the correct help for himself. Thus, the realization of your weakness is a great strength.
Falling to Our Weakness

Self-help starts to be achievable when one realizes his weaknesses, as well as his strengths. It’s divinely decreed that man is created with weakness.

His weakness can overcome him when he bounces into his heart desires. His weakness may control him when he climbs higher on the ladder of power. His weakness may stand out when he’s endowed with wealth; money, knowledge or when taps his hiding talents. All these are types of weakness that are natural and divinely built, in every human being.

At the same time, man is given a very strong weapon, which if he uses wisely, will turn all sorts of his weaknesses into strengths. That is the determination to transform into the ideal person you are meant to be.

Because we are created with such weaknesses and surrounded by them, we may not realize it when we are falling to them. Every son of Adam is expected to fall to some of his weaknesses, at some point in his life on earth. If not now, then tomorrow. If not here then there. If not public, then in privately.


“Every son of Adam commits sin, and the best of those who commit sin are those who repent.”

The problem is not falling to the weakness. It’s in what you do after that; how you recover from it. We must come to terms with that. This helps us to be humble, we ourselves, and it guides us to empathize and sympathize for our fellow human beings, when they, too, fall to their weaknesses.
Don’t Pretend Correctness

It is, therefore, human to fall to your weakness and commit some sins. In other words, it’s inhuman to not fall to your weakness. Because that will contradict with the nature of your being, that was created from clay. In a ḥadīth reported by Imām Muslim, from the narration of Khālid ibn Zayd raḍiya Allāhu ‘anhu, the Messenger of Allah, ṣallā Allāhu ‘alayhi wa sallam, says:


“Were you not to commit sins, Allah would create people who would commit sins and ask for forgiveness and He would forgive them.”

This is not a call to mass gatherings to commit ma‘ṣiah (sins or disobedience). It’s rather a reflection on our true nature. Been created human!

What is not expected from the son of Adam is to pretend righteousness while falling deep in the hole of sins. This comes in different forms. One of the forms is when he makes a prohibited act a permissible one. It could also be when he refuses to accept advice pertaining to his wrongdoing(s). Here, it’s worth emphasizing, that the only problem of Iblīs is that, instead of him apologizing and repenting for his wrong interpretation of things, he went further to justify it, and to challenge and defy Allah in His authority.

Prior to that, perhaps, Iblis didn’t know his limits and that he has a weakness. In following in his footsteps, one may behave in defiance to the truth, deviating from the right path.

This is to say, one may fall to his weakness and commit a sin (ḥarām). But that does not in any ways make the sin nor committing it ḥalāl. Likewise, following one’s desires to practice any form of bid’ah(innovation in Islam) doesn’t make it permissible. It remains bid’ah even if he practices it, and even if it emerges to be acceptable by everyone.

“This day I have perfected for you your religion and completed My favour upon you and have approved for you Islam as religion” (Sūrah al-Mā’idah, 5:3).

For instance, sex out of wedlock is prohibited. If there’s one convincing reason for its prohibition, it’s because God has prohibited it upon us. We don’t know of any authentic sources that imply that other mammals get married before they have intercourse and reproduce. Likewise, the children of our father, Adam and Ḥawwā’, married each other. To them, God made it permissible. But to the later generations and nations, God made that prohibited.

All this requires no reason for permissibility or prohibition. What is required is the sense of obedience to the Almighty, the Creator. Therefore, it is pointless that we put in effort justifying why we want to break the rule(s) of Allah. We can only justify to our fellow humans, and possibly misguide some who listen to us. But one thing is certain; we are not justifying it to Allah.
Conclusion

This is what makes religion as such; religion. Religion is to submit to the will of God, the Almighty. Submission requires that we submit our desires and egos to His commands and instructions. It is up to Him to decide what teachings He decrees upon us.

Therefore, when we discuss the correct and authentic religion of Islam, it’s important to talk religion, not emotions and heart-desires.

Because we may err in interpreting some of His commands, we repeat for the minimum of 17 times a day,

This will keep us in the right track. And it will–in the even if we fall for our weaknesses– get our sins expiated and forgiven, inshā Allah.

Hey there would you mind sharing which blog platform you're working with?
I'm planning to start my own blog soon but I'm having a
difficult time deciding between BlogEngine/Wordpress/B2evolution and Drupal.
The reason I ask is because your layout seems different then most blogs and I'm looking for something completely
unique. P.S Apologies for being off-topic but I had to ask!

Great items from you, man. I've understand your stuff
prior to and you're simply too wonderful. I actually like what you've obtained right here, certainly like what you are saying
and the way in which during which you are saying it. You are making it entertaining and you continue to care
for to keep it wise. I cant wait to learn far more from you.
That is actually a terrific web site.

Wonderful beat ! I would like to apprentice while you
amend your web site, how can i subscribe for a blog site?
The account helped me a acceptable deal.
I had been tiny bit acquainted of this your broadcast offered bright clear idea

Every weekend i used to go to see this website, because i
want enjoyment, since this this site conations
really good funny information too.