Home LIFESTYLE OTHER Is Everything We Desire In Jannah?

Is Everything We Desire In Jannah? 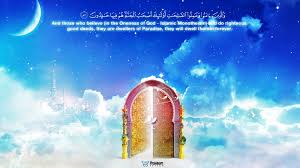 Is Everything We Desire In Jannah?

Therein is all that souls desire…

In the Quranic verses, Allah the Almighty states that any desires of man will be given in jannah.

“Therein are brought round for them trays of gold and goblets, and therein is all that souls desireand eyes find sweet. And ye are immortal therein.” (Surah al Zuhruf)

Narrated Abu Hurairah:
"The lowest place of any of you in Jannah will be that Allah will tell him to express his wish. He will wish and wish again. Allah will then ask him: `Have you expressed your wish?' He will answer: `Yes, I have.' Allah will say: `You will have what you have wished for and the like thereof along with it.''' (Muslim)

Narrated Abu Hurairah [ra]:
“I have prepared for My righteous servants what no eye has seen and no ear has heard, nor has it occurred to the human heart. Thus, recite if you wish, ‘And no soul knows what joy has been kept hidden for them.”’

(Sahih al-Bukhari, Muslim, at-Tirmidhi, and ibn Majah, Surah Al Sajdah, 32: 17)
“ A similitude of the Garden which those who keep their duty (to Allah) are promised: Therein are rivers of water unpolluted, and rivers of milk whereof the flavour changeth not, and rivers of wine delicious to the drinkers, and rivers of clear- run honey; therein for them is every kind of fruit, with pardon from their Lord. (Are those who enjoy all this) like those who are immortal in the Fire and are given boiling water to drink so that it teareth their bowels ?” (Surah al Muhammad, 15)

‘I know the person who will be the last to come out of the Hellfire and the last to enter Jannah. He will be a man who will come out of the Hellfire crawling, and Allah will say to him, ‘Go and enter Jannah.” He will go to it, but will imagine that it has been filled, and then he will re turn and say, “Oh Lord, I have found it full.” Allah will say, “Go and enter Jannah, and you will have what equals the world and ten times as much (you will have as much as ten times the like of the world).” On that, the man will say, “Do you mock at me (laugh at me) though You are the King?” I saw Allah’s Messenger (SAW) (while saying that) smiling that his premolar teeth became visible. It is said that will be the lowest degree among the people of Jannah.” (Sahih al-Bukhari)

The Greatest Bounty in Jannah: Pleasure of Allah
“Say, ‘Shall I bring your attention to things far better than those? For the righteous are gardens in nearness to their Lord, with rivers flowing beneath, eternal therein, with pure companions and the good pleasure of Allah. For within Allah’s sight are all His servants – especially those who say, “Our Lord, we have indeed believed, so forgive us our sins and protect us from the agony of the Fire.” Those who are patient, are truthful, who worship devoutly, who spend in the way of Allah and who prays for forgiveness in the pre-dawn hours.’”

(Surah Ali'-Imran, 15-17)
“Allah has promised to believers, men and women, gardens under which rivers flow to dwell therein eternally and good homes in gardens of everlasting bliss. But the pleasure of Allah is greatest. That is the supreme triumph.” (Surah al Tawbah, 72)

Narrated Abu Sa’eed al-Khudri (ra):
“Allah will say to the inhabitants of Jannah, ‘Oh inhabitants of Jannah! They will say, Oh our Lord, we present ourselves and are at Your pleasure, and good ness rests in Your hands.’ Then He will say, ‘Are you contented?’ They will reply, ‘And how should we not be contented, oh Lord, when You have given to us that which You have given to no one else of Your creation?’ Then He will say, ‘Would you not like Me to give you something better than that?’ They will answer, ‘Oh Lord and what thing is better than that?’ He will say, “shall cause My favor to descend upon you and there you shall never be displeased with you.’” (Sahih al-Bukhari, Muslim and at-Tirmidhi)

No sense of grief for the dwellers of jannah
Surely those who guard (against evil) shall be in the midst of gardens and fountains:
“Enter them in peace, secure. And We will root out whatever of rancor is in their breasts-- (they shall be) as brethren, on raised couches, face to face. Toil shall not afflict them in it, nor shall they be ever ejected from it.” (Surah al Hijr, 45- 47)

“Gardens of perpetuity, they shall enter therein; they shad be made to wear therein bracelets of gold and pearls, and their dress therein shall be silk. And they shall say: (All) praise is due to Allah, Who has made grief to depart from us; most surely our Lord is Forgiving, Multiplier of rewards, Who has made us alight in a house abiding for ever out of . His grace; toil shall not touch us therein, nor shall fatigue therein afflict us.” (Surah al Fatir, 33- 35)

Hello all, here every person is sharing such knowledge,
therefore it's good to read this web site, and I used to go to see this webpage every day.